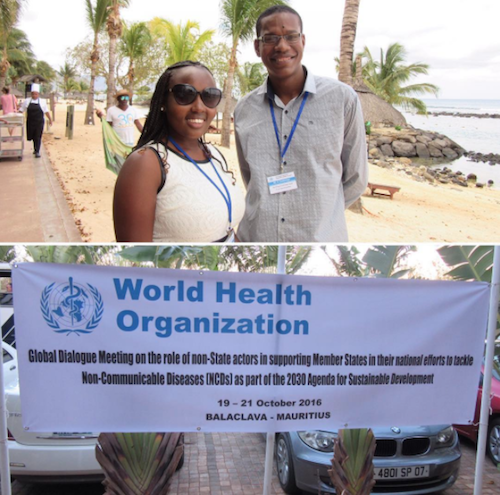 A great hope and a clear plan to truly engaging everyone in the ongoing Global Action Plan for the Prevention and Control of Non Communicable Diseases for the period 2013-2020.

That could be in one sentence the first impressions emerging from this first consultation of its kind held from 19 to 21 October in Balaclava, Mauritius.

Despite commitments made by political leaders during the High Level Meeting of the UN General Assembly on the Prevention and Control of Non communicable Diseases in September 2011, significant achievements from states were still not a reality as of 2015, when progress was last measured. Nearly three-quarters of all countries showed very poor or no progress in 2015 towards achieving the implementation of their time-bound commitments.

The global dialogue has been convened by the World Health Organization’s Global Coordination Mechanism on Non Communicable Diseases (WHO GCM/NCD) to discuss how non-State actors can support Member States in their national efforts to tackle non communicable diseases (NCDs) as part of the 2030 Agenda for Sustainable Development.

Dr Maryam Timol, Director Health Services, Ministry of Health and Quality of Life, Government of Mauritius and H.E. Mr Gilles Huberson, Ambassador of France co-chaired the consultation. Among participants were HRH Princess Dina Mired, the Director General of the King Hussein Cancer Foundation (KHCF) in Jordan. A keynote speech from Dr Margaret Chan WHO Director General was delivered to participants who also enjoyed a cocktail reception offered by the government of Mauritius.

Without any surprise, all interventions at the opening session not only recognized the necessity to engage non-State actors to tackle NCDs, but emphasized the momentum of this consultation to come up with new approaches.

During three days, six sessions gave the floor to participants from diverse background and geographical origin to share on their experiences and the challenges encountered in their respective countries. Sessions were articulated to give directions on a consensus basis on how non states actors could support the establishment of national multisectoral NCD mechanisms and be full actors of monitoring and evaluation of NCD responses. But the true added value of this global dialogue focusing on NCDs control to support state actors came from the multi stakeholder workshops where shared stories were critical to understand common challenges and realize how much specificities still need to be taken into account. We had the opportunity to dive in a model of partnership between government and NGO through the implementation of a national diabetes program in Tanzania or to be inspired by this experience from Thailand in leveraging revenues from taxes on alcohol and tobacco to engage non state actors in the response to NCDs.

Other highlights include this multi stakeholder workshop where Dr. Vicky Pinkney Atkinson shared on the experience of the South African NCD Alliance civil society monitoring in South Africa from 2010-2015: “Advocacy also includes the tough bits like accountability, this is what all worthwhile struggles have taught us…Benchmarking is essential if there is a lack of equity…Evidence is needed… View it as a marathon, get sponsors, a team, buddies and supporters…Ongoing messaging and get personal stories… Journeys are different.”

Professor Jeff Collin from the University of Edinburgh took his workshop’ audience through the sensitive issue of conflict of interest and effective health governance as it pertains to unhealthy commodities.

Day three of the meeting gave basis for general recap and for forging consensus on the roles of each group of non-state actor represented and next steps.

NGOs, Academia, Private Sector and Philanthropies all agreed that as non-state actors it is high time to reject complacency and an agreed specific roles have been delineated for each entity for multisectoral action plans, mechanisms, monitoring and evaluation:

The Balaclava meeting ended with the release of a statement that captured main recommendations and calls of the meeting.

The era of empty rhetoric and inaction is over. We will collectively be held accountable by future generations for our ability to reverse the number of premature deaths caused by NCDs, prevent exposure to NCD risk factors, and to improve the lives of all people living with, at risk or affected by NCDs.

As participants were leaving the island, the burden of this historic responsibility were equally shared among participants.

See other pages related to NCDs WHO