Launched this year, the RHD Action Small Grants Program funded five activities in low-and-middle income countries across the globe to support groups who are already addressing the work of RHD and to bring the work of key RHD stakeholders under the RHD Action banner. Successful applicants were awarded $2,000 with the expectation that the activity would be completed within six-months.

Ms Dilys Kemunto Nyariki, a sixth-year medical student at Moi University, School of Medicine in Eldoret, Kenya was the project lead on behalf of the Eldoret Chapter of the Young Professionals Chronic Disease Network (YPCDN) for the project entitled, “Hearts to Hearts: A Rheumatic Heart Disease (RHD) Awareness Campaign.”

This ambitious project focused on both empowering People Living with RHD (PLWRHD) and educating school children on RHD prevention. Project volunteers included twenty students from the Moi University School of Law, School of Medicine, School of Public Health and the School of Business. Ms Kemunto Nyariki used the small grant award to supplement a larger project that was carried out in two phases: from January to April 2017, and then beginning again in July 2017, with the award of the RHD Action small grant.

The YPCDN has an established track record in conducting RHD awareness activities in Kenya. In 2013, they carried out an RHD awareness project in Nairobi and launched the first RHD patient and caregiver support club in Kenya. A second RHD club was launched in Machakos town in 2015. In the first half of 2017, the Eldoret Chapter conducted a community awareness programme that reached approximately 5,200 primary school children and teachers. The team reached another 5,670 school children with the addition of the RHD Action small grant funds in the second half of 2017, bringing the total of children reached since the start of their campaigns to approximately 10,670.

These most recent school-based programs were carried out in Uasin-Gishu County and targeted children from low-and-middle income homes. As with the previous RHD awareness activities, YPCDN volunteers were trained with information on prevention, and the prognosis and progression of the Strep Throat-to-Rheumatic Fever-to-RHD valvular disease process in advance of the activities. During the sessions, children were divided into groups according to their class/age and then each group was assigned a team leader that taught them how ARF and RHD looks and feels, and how both conditions can be managed and prevented. The children were urged to spread the message to their family and friends through a chant: “tell a friend to tell a friend to save a life”.

Since teachers are the first contacts that children have outside home, project leaders realised the importance of empowering both pupils and educators. Teachers were provided information in separate sessions on the symptoms displayed by children who might be at risk, disease prevention and how to navigate the referral channels to help children access the healthcare services they need. Posters with health messages and information about RHD were created and distributed to the schools to serve as a visible reminder to the children on how to protect their hearts. T shirts were designed and distributed for the school events and the organisers undertook the responsibility of animating and translating the Rheumatic Heart Disease Child’s Rights flier into Kiswahili with support from Australian-based Caring and Living as Neighbors’ (CLAN).

The second phase of the project was conducted at the Rheumatic Heart Disease Clinic in Chandaria Chronic Disease Centre in Eldoret - one of the largest public chronic disease centres in the country - where an RHD patient support group was launched. A patient event was organised to bring together PLWRHD and their families with clinicians and healthcare workers with a specific focus on women of child-bearing age (15-30 years) living with the disease.

With the approval of the Ministry of Health and the cardiac clinic management, patients were selected from those attending the Thursday RHD Clinic and from inpatients who had been admitted for the management of their disease at Moi Teaching and Referral Hospital. Thirty-nine people attended the opening session of the patient support group. Among the invited guests were Dr. Phillipe, a resident in Reproductive Health with a special interest in cardiac disease in pregnancy, Lennah Ndung’u, a final year medical student who as a child was diagnosed with rheumatic fever, and Purity, a 24-year-old mother of one who had undergone open heart surgery to replace her mitral and tricuspid valves. 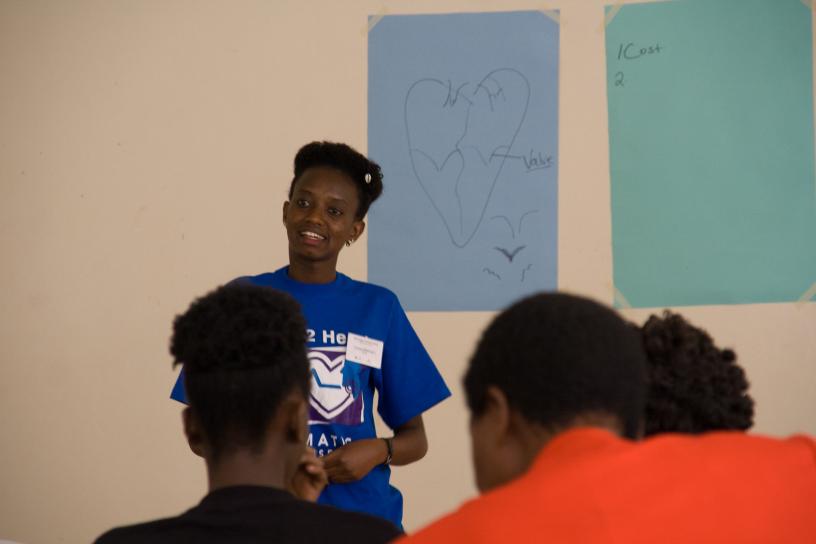 The five-hour event kicked off with an information session describing what RHD is, its signs and symptoms, and management and prevention. Healthcare providers emphasized the importance of patient-health worker collaboration and the advantages of communities working with caregivers. Participants were reminded that working toward mental, physical and social well-being is everyone’s responsibility. This was followed by an extensive discussion led by the PLWRHD and their relatives seeking to find answers to some of their more worrisome questions and clarifications on the topics that were important to them.

Later in the morning, patients and their families heard comprehensive descriptions of the surgical options for severe disease, and demonstrations on how each works and the after-lunch session was focused on the experience of living with RHD. Lennah shared her story of how she was diagnosed with rheumatic fever at the age of eight, and endured painful monthly penicillin injections for a number of years. She spoke about the challenges she faced during the period and the need for a strong support system that includes parents, guardians, siblings and caregivers to ensure adherence to her medication. She was keen to explain the intentional steps she takes in her day-to-day activities to protect her heart and maintain a high quality of life and health.

Purity described her personal experience of living with severe RHD and the ultimate turn-around in her life after open heart surgery. She spoke about the many challenges faced before and after surgery, and the hope and determination she now has in pursuing her dream of become a nurse. The information and discussions were reviewed by participating in a Jeopardy game quiz at the end of the event that covered the many aspects of living with RHD.

The personal experiences shared by PLWRHD were by far the highlight of the event; this was the first time that most of the patients and relatives had attended an event such as this, and the first time for many to meet and share experiences with fellow PLWRHD. The sentiments shared at closing were those of hope, encouragement and desire to be more involved in the fight against RHD.

A strong call from the community included the inclusion of local and international health bodies, including the government, to make child health a priority so that no child is deprived of his/her right to access affordable health care services, asserting that where a child lives should never determine whether that child lives or dies. Patients expressed the need for Universal Health Coverage and other ways that would lower the cost of treatment and increase access to affordable, high-quality care.

Ms Kemunto Nyariki on behalf of the Eldoret YPCDN expressed her gratitude to RHD Action for their continued support, Drs Mellany and Myra for the guidance provided throughout the project, and CLAN (Caring and Living as Neighbours) who assisted with the Child’s Rights flyers. Management from the Cardiology Clinic at the Chandaria and Chronic Diseases Centre. Thanks were also extended to GK Prison Schools, the school administration of Langas, Sosiani, and the University of Eldoret, the County Department of Health (Uasin-Gishu) for allowing the team to work in their schools. Lastly, gratitude was expressed to the teachers for their support and patience, all the volunteers who dedicated their time and energy to the project, and pupils who were present and made the activity an eventful and fun project.